The Backseat Mentality: What Everest, The Avengers, and Large Diameter Hose mean to our leaders and to those who ride backwards

This course will teach and reinforce “Roughnecks” or those who ride backwards what it means to function at your highest level.  When it comes to patient assessments on medical calls, fire ground performance and preparation metrics, your role in organizational accountability or a mentality of leadership your officers can rely on, roughnecks must perform.  For the company and staff level officers, this will emphasize techniques for empowerment of your junior leaders and getting the most out of the foundation of your departments. Topics include: Organizational leadership lessons from an urban department, best practices for line leaders on the fire ground, medical response, rescue task force deployment, and mitigating turnover of your members.  Incident reviews of 5/3rd active shooter, Cameo Nightclub Mass Shooting (Cincinnati) will also be included. 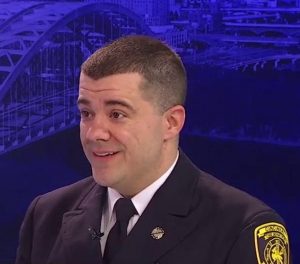 Brian Doering started in the fire service as a volunteer in 2004 and became a career firefighter with the City of Cincinnati Fire Department in 2008. He is currently assigned to Medic 46 based in Hyde Park Square on the east side of Cincinnati where his unit continues to make over 4,000 incidents per year.

He joined the department while finishing up an enlistment in the US Army Reserves where he served as Sergeant and Team Leader as an Armor Crewman, Construction Equipment Operator, and Combat Engineer. He is currently assigned to Medic 46 based in Hyde Park Square on the east side of Cincinnati.

Brian has prided himself on many career advancements including obtaining board certifications in flight medicine and tactical medicine, multiple austere medicine assignments, and regularly instructs EMS courses at Scarlet Oaks and Cincinnati State. Brian is a member of the Southwest Ohio EMS Protocol Development Committee, Special Operations Medical Association, and also served 2 terms as a village councilman. He has traveled the Greater Cincinnati region teaching “Stop The Bleed” for the American College of Surgeons and University of Cincinnati Medical Center and he has also been an EMS presenter for multiple health systems and hospital partners in the region.

In April 2018, Brian served as a member of an expedition in the Everest Region of Nepal. Three physicians, a paramedic supervisor, and a regional director of the Red Cross also made up the team. The team climbed throughout the Khumbu Region for several weeks ultimately making the climb to Everest Base Camp at 18,000ft. The team toured the Everest Base Camp ER and used the opportunity to exchange best-practices with the Himalayan Rescue Association.

Brian continues to serve as the senior medic assigned to Medic 46 with the City of Cincinnati and challenging his supervisors, peers, and students to always make excellence the minimum standard of care.